How to Change the Focus of Your Business

Crochetpreneur > Crochet Business Tips > For Bloggers > Someone Stole My Design! How to Respond to Copycats

If you’ve been in the fiber arts community long enough, you’ve heard it over and over again…someone stole my design!

And, inevitably, the waves of support and accusations being to roll in like a tsunami. “Villians” are named. “Victims” are pitied.

Sides are taken and the community reels for days.

And, even in the though this happens month after month, year after year, no one has come up with a sane and reasonable roadmap for responding to copycats. Well, that ends today because, personally, I’ve had enough of the histrionics and the cancel culture.

Those worn-out tactics have had their day.

How about we all, as a community, commit to a measured, thoughtful response rather than the chaos of reaction?

How to Deal When Your Design has been Copied

So, yeah, it’s happened to so many of us…you woke up in the morning only to find that someone somewhere has launched a product or pattern that looks eerily similar to your own.

Quick Tip: Whether she copied you or not, go ahead and add her to your “She’s Dead to Me” list, just for the heck of it. That means you unfollow her, you block her, and you unsubscribe her from your list because it’s going to drive you crazy if you don’t. (Thanks to my good friend, Lisa, from Stitch in Progress, for this tip!)

A Little Perspective on Copyright for Crocheters

That means you could curate an amazing product line that has our ideal customer oohing and aahing and saying, “Take my money!” and another seller can come along and create a line that looks just like yours and start selling all the same sorts of products.

It also means that, as a designer, the idea of your design is not copyrightable. So, the idea of a twisted headband or of a ripple blanket or of a moss stitch cup cozy can’t be copyrighted or trademarked.

I’m not a lawyer by any means, but as far as I’m aware, the protections that you DO have are copyright protections for

And, provided you were the first to use your brand name in commerce in your niche, you have trademark protections for your brand. Note: it’s even better to pursue a registered trademark ® when you’re ready for that but you can use a simple ™ symbol to stake your claim in the meantime.

A Little Dose of Reality

And, in the grand scheme of things, there are several reasons to consider that maybe, just maybe, she didn’t even know your design existed.

There is nothing new under the sun. Ecclesiastes 1:9

It’s inevitable, considering all the things we subconsciously encounter in the age of the internet and that fact that so many people are chasing trends and trying to make them their own, that we, on occasion, come up with the same idea as someone else…even at the same time.

It has happened to me more than once where I was working on a design and someone else in the community launched the same thing just days before or after. 🤷‍♀️

And once or twice, I had suspected someone of copying only to discover that their design had been released weeks before mine and I had never seen it!

Given that we can’t always know or prove that something was copied and, even if it was, we don’t have a lot of protections for our designs anyway, how can we handle it best?

5 Steps to Take When You Suspect You’ve Been Copied

The world is full of people carrying regrets for the actions they took immediately following a shock. But there are few people who regret taking some time to cool down, assess the situation, consider their options and potential consequences, and respond intentionally.

The first step in getting to that place is to breathe.

Unforgiveness is the number one thing hindering most people’s success. Billy Alsbrooks

Once you’ve taken a little time to breathe and sit quietly with yourself. It’s important to ask not “who does she think she is?” but “who do I want to be?”

As a business owner, do I want to be the kind of person who harbors bitterness? No.

Do I want to be the kind of person who yells FIRE every time something doesn’t go the way I think it ought? No.

Even if she did copy, what will come of my confronting her or stirring my followers to do the same?

What fear is being triggered? Am I afraid she’ll steal my customers? My profits? My security? If so, how can I deal with that fear in a way that moves my life and business forward?

Could this trigger actually be a blessing in disguise? Can I use this situation in a positive way to create momentum for my own ideas?

All of these questions are more valuable to you and more helpful to your business than the question, “how can I hurt her for hurting me?” or “how can I prove I am right?”

Do you see the energy shift in the quality of those questions?

Much like the last step, consider the fact that your perception may not be the reality.

Your design may not have been stolen.

Your profits may not be threatened.

You may not, actually, be a victim.

Whatever action you choose to take, take them from a place of humility and of understanding that you don’t have the whole story.

If, after some time and consideration, you determine that you have been copied (in the unethical sense, not in the legal sense) and you’d like to reach out (and 99% of the time, this is a bad idea), reach out privately, please.

Don’t rally your followers in an attempt to “expose the thief.”

And, by all means, don’t post your accusations in the other person’s group or on their page/post.

When you respond with a spirit of “community and collaboration over competition”, you are more likely to make some headway with the situation.

Chill Out & Calm the Masses

Finally, as the CEO of your crochet business, it is incumbent on you to act responsibly and not to jump on the cancel culture hate-train.

Your followers may come to you and mention the copycat. They may begin rallying your supporters in an attempt to crush the competition. And they may make everything 10x worse.

The responsible thing would be to ask them, either privately or publicly, to leave the responding up to you. Try some sort of copy like this:

“I’ve been made aware of a situation in which some of you feel that I’ve been wronged. I’m so grateful to have your support and encouragement – you guys are the best! And I understand that it’s only because you care that you’re wanting to reach out and confront the situation on my behalf but I’m asking you to refrain from doing that. I’m a big girl and I will address the situation privately. Just know that I’ve got it covered. Thanks for respecting my decision – and if you don’t know what I’m talking about, great! Let’s all get on with enjoying this community without the drama. Thank you! 😘”

When to Take Legal Action

Again, I’m not a lawyer, just another learning and growing business owner like yourself. So, this is coming from a place of “what would Pam do.”

If you feel you have a clear case of intellectual property theft, whether copyright or trademark infringement of your crochet business, please, please, please contact a lawyer before taking action.

The only exception to this would be if you see that someone has stolen your images.

In the case of an individual using your image without permission, a simple, “this is a copyrighted image owned by me, I respectfully ask that you remove it immediately to ensure that no legal action is necessary” will suffice.

Or, in the case of a scraper site or unscrupulous blog stealing your Pinterest pin and redirecting it to their own site in order to make ad revenue, simply report the pin using Pinterest’s intellectual property theft reporting system.

Well, it’s pretty evident by the length of this post that this whole thing is complicated but I’d like to leave you with this…

When there is no clear evidence of illegal behavior on the part of another person in the community, your peace of mind is best served by letting it go.

We all know that late-comers and copycats will be found out in the long run and nothing they do will threaten your own value in the marketplace.

Leave them to their own conscience and karma, if you believe in that sort of thing.

Now, own your awesome. You’ve got this!

Want to know more about crocheters and the law? Check out my post “5 Common Ways Crocheters Break the Law Every Day“ 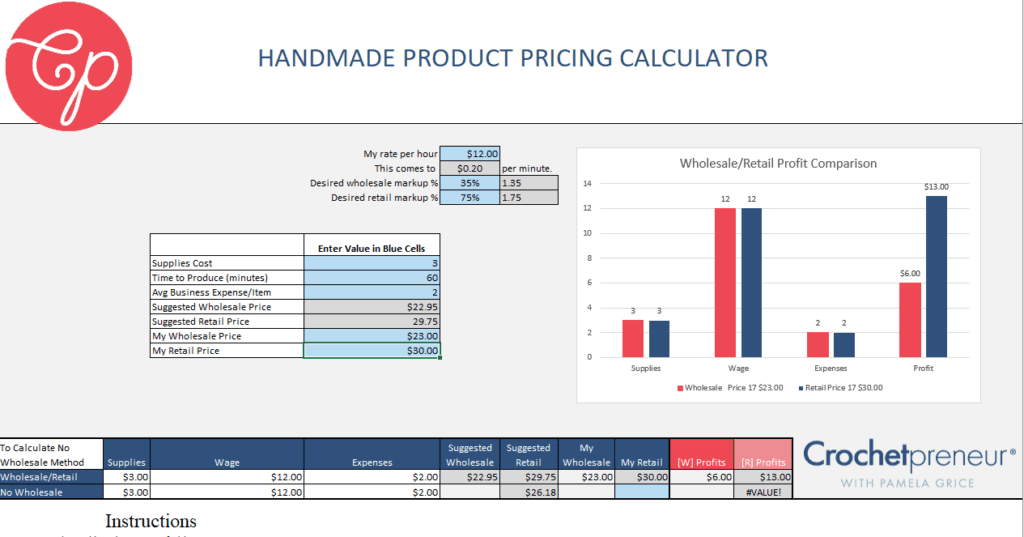