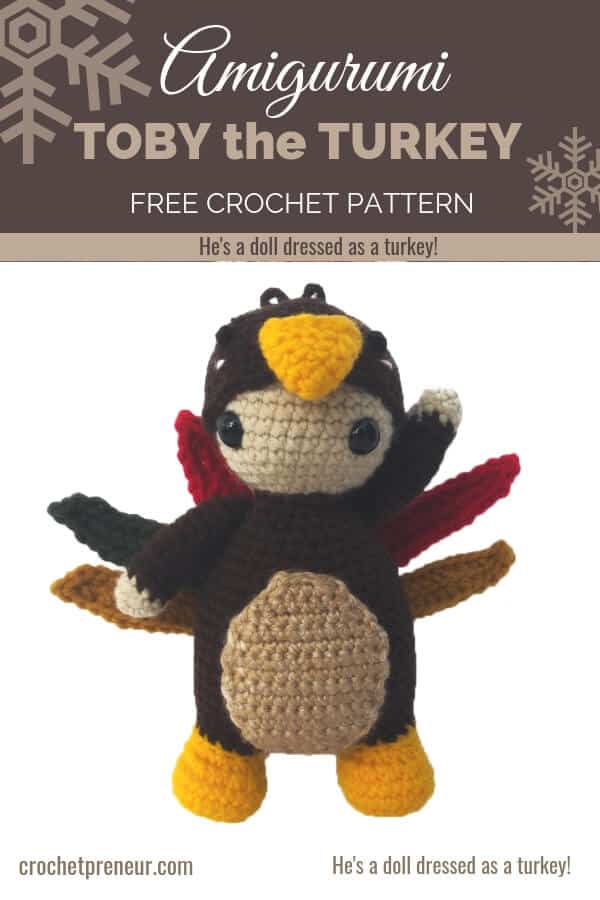 It’s Day 3 of the 30 Days of Cozy. Today’s pattern comes from Bethany Pratt of Bela Crochets. Here’s what she has to say about this dressed-up turkey amigurumi crochet pattern:

OH, JUST AS AN FYI, THIS POST MAY CONTAIN AFFILIATE LINKS, VIEW MY DISCLOSURE POLICY HERE FOR DETAILS. FAIR WARNING: IT'S LONG AND BORING, BUT IT DOES THE TRICK.

Toby the Turkey isn’t really a turkey which is good news for him because November is a very dangerous time to be a turkey! Toby is just a boy who figured some people love to dress up for Halloween and some like to get dolled up for Christmas so he decided he would dress up for Thanksgiving.

Toby is the second friend in my Kiddos in Costume series (Here’s number one, Henry the Halloween Cat). I hope to release a new friend at the beginning of each month and they will be themed whenever possible. Are they stuffed animals? Are they dolls? It’s hard to say, but one thing is for sure, they are adorable! 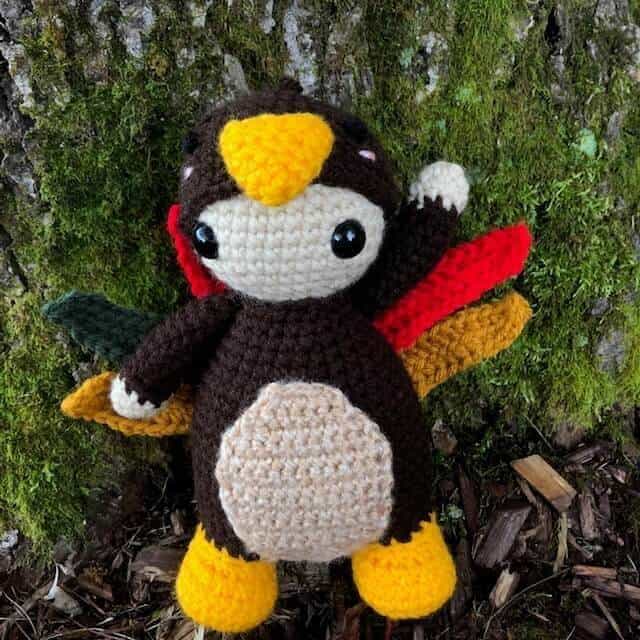 Are you ready to make your own?

There are several ways you can access the pattern for this adorable little guy:

With Your Flesh Color

Stop to attach eyes. Attach the eyes between the 8th and 9th round counting from your magic circle at the bottom. Leave 7 sts in between each eye.

Close to finish, weave in end

Fasten off foot 1, make a second foot and do NOT fasten off

Round 8 is to create the panel between the feet to give Toby some width. This is worked in rows.

The feet now become the body

Stop to stuff body to this point

Fasten off leaving a long tail for sewing to head. Stuff body a little more if necessary and sew head to body making sure to center your eyes with the front of the body.

Fasten off leaving a long tail for sewing to head.

Fasten off leaving a long tail to sew to hood. Fold in half and whip stitch across top (or favorite joining method).

Place hood onto head. Align so that your last stitch is in the back just above the right shoulder. Center the beak to front of the hood, remove hood from head and sew beak into place.

With black yarn make a french knot or embroider one eye about one or two stitches to each side of the beak.

With pink yarn pull the yarn over one stitch beneath each eye.

With Your Flesh Color

Fasten off leaving a long tail for sewing to body, stuff lightly if desired. Fold top in halt and slip stitch across top to seal, attach arms to body.

Begin by leaving a long tail few sewing to body.

(I prefer to begin with the tail as I find it easier to begin sewing the tummy patch at the bottom. If you prefer you can leave the long tail at the end instead.)

Fasten off leaving a long tail few sewing to body, Center tummy patch in between each foot and sew into place

Make 2 of each in red and green, make 3 in gold

Fasten off, weave in ends

For the tail I layered my three gold feathers together with one in the center and two to either side. I cut a long length of gold yarn and used this to sew the feathers in place. I then arrange one red and one green feather into the space between each of the gold feathers and sewed them into place. I then sewed the entire tail to Toby.

Congratulations! You have just finished making your super cute Toby the Turkey!

❁ ONCE YOUR PROJECT IS FINISHED

I know you’re going to love making Toby the Turkey and I so look forward to seeing your finished product.

I can’t wait to see your creations!

Until then, stay cozy and keep on yarning. ♥

❁ ABOUT THE DESIGNER 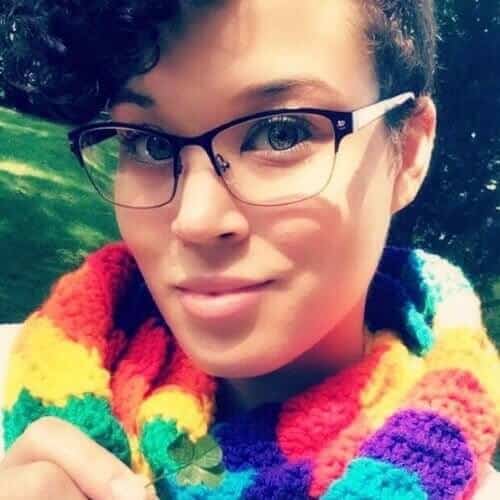 Bethany has pursued her artistic interests from a very early age. No matter the interest her creative soul shines through in her efforts to bring into being something for all to enjoy. About four years ago Bethany was recovering from a foot surgery limiting her world and activities. During this time she began to teach herself how to crochet. As her skill grew she began to alter and design her own patterns. She always had a love for stuffed animals and the joy they can bring others, which is why designing a new cute friend is one of her favorite projects. 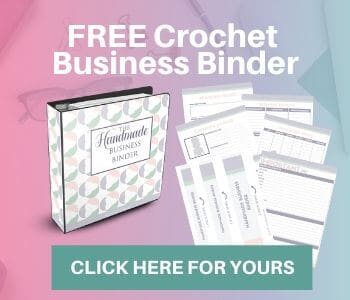